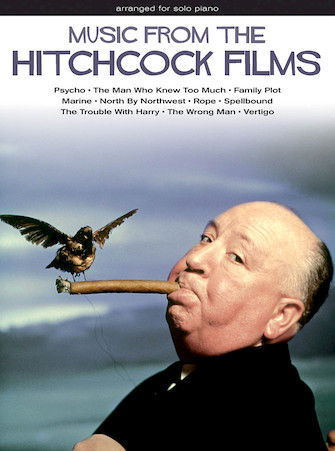 Alfred Hitchcock was once so famous he was the only film director whose name appeared on the cinema marquee above the title. He disparaged actors and loathed location shooting since both threatened the precise realization of the film he had already made in his mind. Yet, in his Hollywood heyday he forged some creative collaborations he truly valued: those with composers. From the start, Hitchcock knew that music was an invaluable aid to any director of suspense movies who wanted to put his audience through the emotional wringer. From Arthur Benjamin's pivotal cantata in the 1934 version of The Man Who Knew Too Much to Bernard Herrmann's jagged soundtrack for the landmark shocker Psycho, the music was usually a visceral part of any Hitchcock movie. By the time John Williams scored Hitchcock's final film Family Plot (1976) a whole generation of moviegoers would always remember their favorite Hitchcock film with, as it were, the soundtrack attached. Here, arranged for piano, are some of the most evocative themes from some of Hitchcock's most unforgettable films.

100 of the Most Beautiful Piano Solos Ever Piano Solo Songbook

The Theory of Everything Piano Solo Songbook

How to Train Your Dragon Piano Solo Songbook

Music from the Hitchcock Films has been added to your cart

The Theory of Everything Piano Solo Songbook Add to Cart

How to Train Your Dragon Piano Solo Songbook Add to Cart

Due to high demand, Music from the Hitchcock Films is on back order