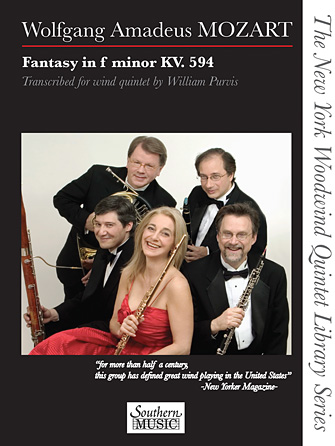 These two extraordinary works of late Mozart, KV 594 and KV 608, were both composed to fulfill a commission for a memorial exhibit in Vienna, to be played in a “mechanical clock organ.” The term “fantasy” or “fantasia” came to be affixed to these works later, and is more descriptive and less cumbersome than the term Mozart listed in his own catalogue, “Ein Stüke für ein Orgelwerk in ein Uhr.” They are also variously titled “Adagio und Allegro in f für ein Orgelwerk” and “Allegro und Andante (Fantasie in f) für eine Orgelwaltze.”

The first of these, composed between the monumental String Quintet in D and the Piano Concerto in Bb KV 595, is an A-B-A form, comprised of an f minor Adagio opening and closing, with a contrapuntal Allegro at its heart. KV 608 is more complicated, opening with an f minor section reminiscent of a French Overture, followed by a fugue in f minor, then an Andante aria, followed by a return to the opening and then a more complex version of the fugue.

Despite the frustration that Mozart expressed (in a letter to Constanze) with the sound world of these mechanical devices, KV 594 and 608 are remarkable works which stand at an intersection, incorporating what he learned about counterpoint studying at the foot of Bach, while looking ahead to the emotional and harmonic poignancy of Schubert.

Fantasy in F Minor, K. 594 has been added to your cart