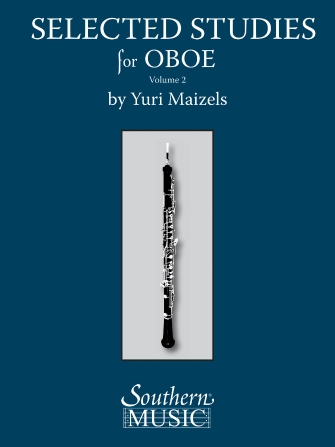 This collection of etudes, duets, and exercises was written, compiled and edited by Russian oboist and pedagogue Yuri Maizels to provide the most efficient means possible for young players to learn the basics of oboe playing. The composers, Hinke (a German composer who taught and worked in St. Petersburg during the reign of the Tsars), Wiedemann, Garnier and Debondue are among the finest of writers and pedagogues featured in this series. These studies begin very simply and gradually increase in difficulty, becoming more challenging melodically and rhythmically, with increasing comprehension of the instrument. Short phrases enable the student to learn to control both breathing and intonation. This collection of studies, in three volumes, can help a high school student or young professional to master technique, breathing, and intonation while developing the endurance that is vitally important for oboe players. Yuri Maizels was born in Leningrad (now St. Petersburg) in the former Soviet Union. After the conclusion of the Second World War, he was accepted at age 13 into the Naval Boarding Musical School in Leningrad (the school which had been organized in 1873 by Rimsky-Korsakov), to study the oboe. In 1964, he graduated from the College of Music with multiple degrees in oboe performance, oboe teaching, and conducting. During his career, Yuri Maizels played in major orchestras, working with such well-known conductors such as Yuri Temirkanov, Mariss Jansons, Yuri Simionov, Valery Gergiev and others.

Due to high demand, Selected Studies for Oboe – Volume 2 is on back order