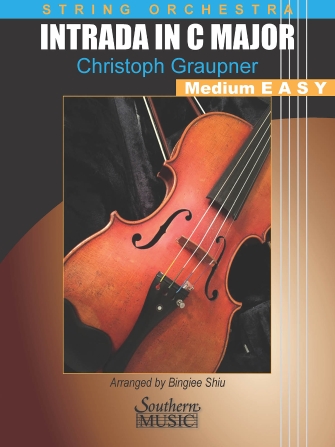 Johann Christoph Graupner (1683 - 1760) was a German harpsichordist and composer of high Baroque music who was a contemporary of Bach, Telemann and Handel. His short Intrada in C, written originally for harpsichord, is carefully adapted in this easy string orchestra transcription by Bingiee Shiu.

Despite being hardworking and prolific, with about 2000 surviving works in his catalog, Graupner's music fell into obscurity after his death, due in part to a legal dispute over the ownership of his manuscripts, as well as the change of taste in musical styles that would usher in the Classical period. Interestingly, just prior to Bach, Graupner was offered the Cantorate position in Leipzig, which he had accepted until his current patron, in a sudden change of heart, paid the back wages Graupner had been owed, along with a significant increase in salary to retain him, opening the way for Bach's appointment. Today, Graupner's music is enjoying a revival due to the efforts of musicologists, performers and educators.