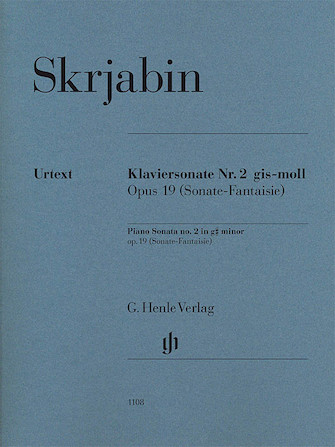 Scriabin's two movement Piano Sonata no. 2 in g sharp minor was composed over a relatively lengthy period of time. He first began work on it in 1892, but in the summer of 1896, after Scriabin had performed the sonata several times in public in Paris, he dispiritedly told the publisher and patron Beljajev, with whome he was friends: “I have admittedly finished the sonata, yet I am completely dissatisfied with it, even though it has been revised seven times.” The composer was only happy with it in 1898 and the work was then published. For the Henle Urtext edition we not only consulted the first edition that the composer carefully oversaw but also a recording of Scriabin himself playing the work done on paper rolls for the mechanical pianos made by the company of Ludwig Hupfeld.

Piano Sonata No. 2 in G-sharp minor, Op. 19 has been added to your cart

Due to high demand, Piano Sonata No. 2 in G-sharp minor, Op. 19 is on back order