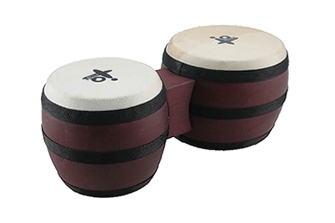 It is believed that the first bongo drums were used in Cuba during the late 19th century. They were used for the music styles called Changui amd Son. This music originated with equal influences from both the African and Spanish cultures that lived in Cuba during that time. It eventually evolved into today's Salsa.

Children can enjoy playing the IQ Plus Bongos by clamping it between their legs, adjusting the macho to lean against one thigh, hembra angles down against the opposite calf, and start making music by striking the drums with the pads of their fingertips.

The bongos are one of the most popular instruments for beginner percussion players as it is one of the easiest to learn. Children will be able to enjoy creating different rhythms and sounds along with other percussion instruments as part of a band, or they can play individually as well!

•Durable and light weight, easy for children to hold and play