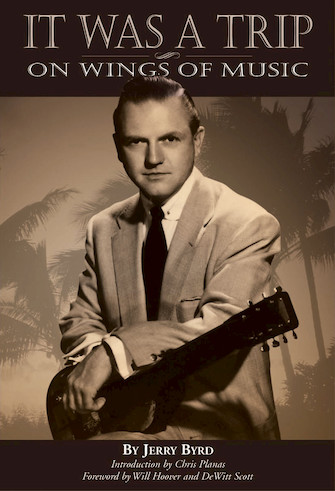 In its listing of the “20 That Mattered,” Guitar Player magazine stated that “Jerry Byrd is the standard by which all steel guitarists must be measured.” A fixture on the country scene, Byrd was a session player in Nashville in the mid-1940s and was influential in the development of the “Nashville Sound.” He played on the hits of a who's who of legends, including Hank Williams (“Lovesick Blues” and “I'm So Lonesome I Could Cry”), Pasty Cline, Ernest Tubb, Red Foley, Marty Robbins, Chet Atkins, Guy Mitchell, Burl Ives and countless others; he now has the distinction of being the artist with the world's largest steel guitar discography. Later, as the head of Combine Music Publishing, Byrd was the first to sign Dolly Parton. Drawn to the music of Hawaiian steel guitarists, he went on to develop a style and invent tunings that would become synonymous with the instrument, becoming the first inductee into the Steel Guitar Hall of Fame. In 1972, Byrd headed for Hawaii, only to discover that the islands had turned their back on the instrument that gave them their signature sound. Thus, Byrd's mission became to reacquaint Hawaii with its own creation. His inspiration not only bridged country and Hawaiian music, but also secured the steel guitar's place in the 21st century. Featuring dozens of rare photos, It Was a Trip, On Wings of Music brings to light Byrd's life and times, opening up an important chapter in American musical history.

It Was a Trip, On Wings of Music has been added to your cart

Due to high demand, It Was a Trip, On Wings of Music is on back order