Raisin' Cain: The Wild and Raucous Story of Johnny Winter 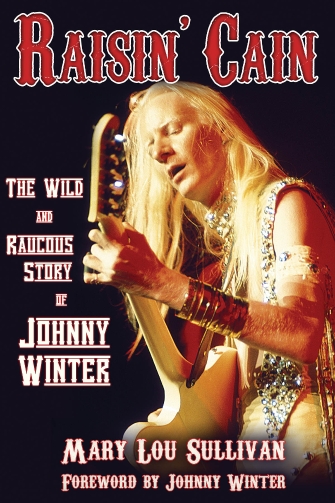 Raisin' Cain: The Wild and Raucous Story of Johnny Winter

Author Mary Lou Sullivan sat with Johnny Winter for hours of exclusive, no-holds-barred interviews, covering the guitar slinger's entire career. From toughing it out in Texas to his appearance at Woodstock, his affair with Janis Joplin, his stadium-filling tours, and washing out on drugs and the temptations of the road before finally fulfilling his dream of becoming a 100-percent pure bluesman, resurrecting the career of Muddy Waters, and winning a Grammy Award for his effort, this is a raucous roller coaster of story.

Rolling Stone magazine has called Johnny Winter one of the greatest guitar players of all time. Ripped off and beaten down by unscrupulous managers, strung out, living the extreme highs and extreme lows of an uncompromising musician, Johnny is a true rock 'n' roll survivor. Signing with Columbia in 1969 for the largest advance ever paid a musician (which led to his appearance at Woodstock, recently reissued in the deluxe Woodstock Experience box set) he has jammed with guitar heavies Hendrix, Clapton, and the Allman Brothers. He is a legend and an icon, paving the way for fellow Texas superstars Stevie Ray Vaughan and ZZ Top. Along the way he has gone from boom to bust and back again, but has never lost his lust for his own brand of blues. Still on the road, playing hundreds of gigs a year to his devoted, adoring fans, Johnny, like this book, is the real deal.

Raisin' Cain: The Wild and Raucous Story of Johnny Winter has been added to your cart

Due to high demand, Raisin' Cain: The Wild and Raucous Story of Johnny Winter is on back order