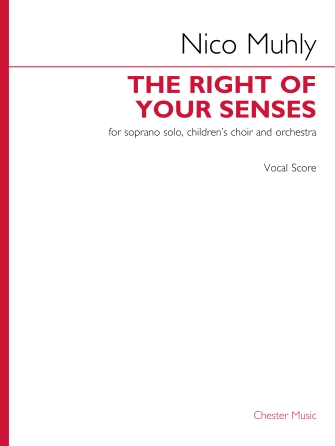 The Right of Your Senses is a set of nine songs for children's voices, solo soprano, and orchestra written for the National Children's Chorus, American Youth Symphony and Los Angeles Philharmonic Association. The texts are primarily 17th-century, by Thomas Traherne and George Herbert, but two of them come from the 11th-century Enchiridion by Byrhtferth. The overarching theme is the story of creation, but not just the list of objects created: the texts deal with the emotional resonances of the sun, the sea, the air, and the moon with all their mysterious, bright, and dark potential. There is a recurring gesture in the strings, introduced at the very top: a simple descending pattern which binds many of the movements together, even when hidden in the more tumultuous sections. The first two movements are bright, whereas the middle three movements are violent and deal with the angrier natural elements. The seventh movement is the most abstract and playful, and here a direct nod to Benjamin Britten's A Ceremony of Carols, with a fast three-part canon depicting the behavior of the atom. The eighth movement, Night, is the slowest, and depicts the night sky. The final movement is calm, and encourages us: “Be faithful in a little, and you shall be master over much.” The piece ends with five strokes of high bells. × Nico Muhly

A Great Many Things Choral

Set Me as a Seal Rejoice Honoring Jewish Spirit

As Silver Is Tried Choral

The Right of Your Senses has been added to your cart

A Great Many Things Choral Add to Cart

As Silver Is Tried Choral Add to Cart

Due to high demand, The Right of Your Senses is on back order