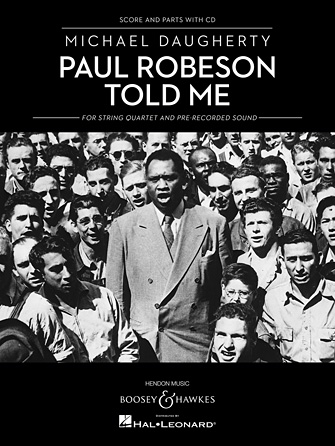 Paul Robeson Told Me (1994) was commissioned for the Smith Quartet by the Bath International Music Festival. This work is part of a trilogy composed I wrote for string quartet and pre-recorded sound, including Sing Sing: J. Edgar Hoover (1992) and Elvis Everywhere (1993). Paul Robeson (1898-1976) was a world-renowned singer and actor who used his fame to advocate for racial equality around the world. Coming to prominence during the Harlem Renaissance, Robeson was widely admired for his acting on stage as Shakespeare's Othello, and in Hollywood films such as “The Emperor Jones” and “Showboat.” After the Second World War, Robeson became an international political activist and outspoken critic of racism who used his celebrity to champion the rights of workers and oppressed minorities. Because of these activities and his views on socialism, J. Edgar Hoover and the FBI kept him under close surveillance.

The energy of Robeson's voice soulfully singing and passionately speaking for civil rights inspired me to compose this work for sstring quartet and pre-recorded sound. The work is nine minutes in duration and divided into two movements, performed without pause. In the first movement, I reconfigure excerpts from a rare, historic sound recording that I discovered in the Library of Congress. We hear Robeson singing “The People's Battle Song” in Russian, with an orchestra, during a concert tour of the Soviet Union in 1949. The string quartet augments the cadences of Robeson's powerful voice, and weaves through the orchestral accompaniment with original musical material that I have composed. The second movement features the string quartet alone. I further elaborate the thematic musical material introduced in the first movement, through vibrant syncopations, complex polyrhythms, and fearless fiddling.

The High and the Mighty Peermusic Classical

On the Air Michael Daugherty Music

Paul Robeson Told Me has been added to your cart

Due to high demand, Paul Robeson Told Me is on back order