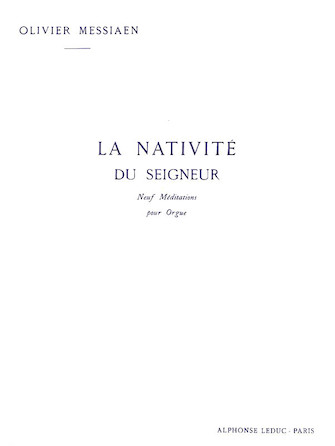 The Nativity of the Lord by Olivier Messiaen was written in 1935 and depicts his Roman Catholic faith. Written for organ, this piece is considered one of the great organ works of all time and as a real masterpiece, as said by R. F. Goldman, the American composer. Divided into nine movements, each portrays a concept related to the birth of Jesus: 1. La vierge et l'enfant (The Virgin and Child) 2. Les bergers (The Shepherds) 3. Desseins éternels (Eternal designs) 4. Le verbe (The Word) 5. Les enfants de Dieu (The Children of God) 6. Les anges (The Angels) 7. Jésus accepte la souffrance (Jesus accepts suffering) 8. Les mages (The Magi) 9. Dieu parmi nous (God Among Us).

Olivier Messiaen (1908-1992) was a French organist and composer passionate about Ornithology and one of the most important composer of his century. Inspired by Japanese music, he had a very special way of composing and his work can be identified by its complexity, its diatonic aspect, its harmony with limited transposition, its colour and its additive rhythms. He composed many works related to ornithology and birdsong, including the Bird Catalogue in 7 volumes and the Treatise on rhythm, colour and ornithology in 7 volumes.