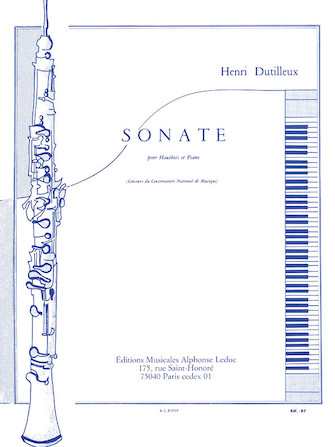 “Created in 1947 as part of the four exam pieces for the Paris Conservatoire, this Sonate for Oboe and Piano is one of the early works of Henri Dutilleux (1916-2013), a French Composer following the paths of Maurice Ravel and Claude Debussy with an idiosyncratic way of writing. Sonate was part of the compositions that were later disowned by the composer who considered them as being not mature enough compared to his main work, even though they were played and enjoyed regularly all over the world. This duet integrates a variety of contrapuntal procedures, which were highly appreciated by the composer. Composed of three movements, the first one begins with an austere canon while the latter two comprise more texture. Henri Dutilleux was internationally acclaimed for his work winning prizes such as the Gold Medal of the Royal Philharmonic Society and the UNESCO's International Rostrum of Composers, among many others. His work also includes a Piano sonata, two symphonies, the Cello concerto Tout un monde lointain (A whole distant world), the Violin concerto L'arbre des songes (The tree of dreams) and the string quartet Ainsi la nuit (Thus the night).”

18 Etudes For Oboe Or Saxophone (oboe And Saxophone) Leduc

Sonate Hautbois Et Piano has been added to your cart

The Collected Songs of Theodore Chanler Vocal Add to Cart

Due to high demand, Sonate Hautbois Et Piano is on back order