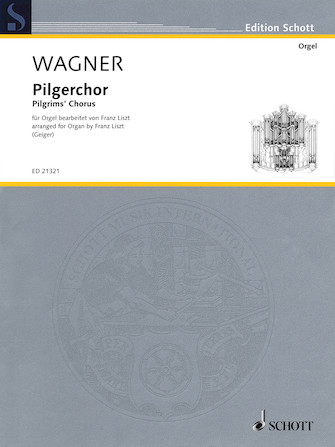 During his time in Weimar (1848-1861), Liszt developed a then entirely new organ style which stands out for both orchestral and pianistic elements. Together with the choirmaster Alexander Wilhelm Gottschalg (1827-1908) from Tiefurt, he regularly initiated so-called 'organ conferences'. And it was at the suggestion of Gottschalg that the present arrangement of the Pilgrim's Choir from the opera 'Tannhäuser' was written. With his version for organ, Liszt, by means of this example, laid the foundations for the (not always undisputed) tradition, extending to the present day, of organ transcriptions from the operas of Wagner. 'Organistic' elements in the pilgrims' Choir are the classical chorale theme, the solemn 'sacred' atmosphere of the solemn tempo as well as the expressive cantability. The linear intensification, from the antiphonal-organ-like piano dolce of the beginning to the 'full organ', can be realized in a convincing manner with an orchestrally conceived three-manual organ, with the sensitive use of the swell box and the successive, seamless build-up of the crescendo pedal being of particular significance. Important repertoire piece marking the 200th birthday of Richard Wagner in 2013.

Pilgrims' Chorus has been added to your cart

Due to high demand, Pilgrims' Chorus is on back order