Transcription from Bach's Partita No. 2 in D Minor BWV1004 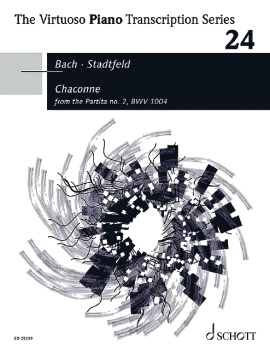 Transcription from Bach's Partita No. 2 in D Minor BWV1004

Feared, respected and loved. Touchstone, limit experience and temptation. One of the greatest, most mysterious works in music history to date is the Chaconne by Johann Sebastian Bach, a work that was composed for the violin and transcribed several times for the piano, a work played by orchestras, organists and guitarists, cellists and drummers.

In the summer of 1720 Bach returned from Karlovy Vary after a business trip lasting several months. What he didn't know: he came back as a widower. Maria Barbara, his wife, had died shortly before. Bach could only say goodbye to her at the grave. A little laterhe started composing a partita for solo violin. The key: dark, D minor. The first four movements are 155 bars long, but the fifth, the chaconne, is beyond the scope. It stretches over 257 bars and revolves around several choral themes dealing with death and resurrection. As later in the Goldberg Variations, Bach places the main theme in the bass part, and both works are based on a saraband rhythm. Robert Schumann arranged the Chaconne in 1853 for violin with an obligatory piano part, and Johannes Brahms designed a version for piano around 1877, “An exercise for the left hand”, as he called it. In Ferruccio Busani's Bach arrangements published between 1916 and 1919, the Chaconne occupies the most prominent place. Busoni created a sophisticated concert piece from the template, with opulent, organ-like timbres. At first he had even thought of an orchestral version, but then changed his mind.

When Martin Stadtfeld was asked to put this version of Busoni on the program for a concert in Asia, he noticed, in spite of all admiration, “that this editing did not go with my feelings emotionally, because every transcription already contains part of the interpretation.” So Stadtfeld began to look for a way to determine his inner resistance. Busoni's version seemed too bombastic, too virtuosic, too massive. Naturally, Stadtfeld's version also emphasizes the bass foundation, whose rhythmic structure contains “something archaic” for him, especially in connection with the interval of the fifth - the interval in which a violin is tuned. What is important about his processing is Stadtfeld that he has “found different colors for the respective parts, which should differentiate themselves from each other”.

Stadtfeld does not want to exclude that there was already an earlier form of this chaconne in Bach's world of thought. Of course, like so much with Bach, this cannot be demonstrated. “But some nesting in major reminds me of his earlier organ works and the circle around the empty strings is known from the D minor toccata.” Bach had already written this during his time in Arnstadt, where he was employed from 1703. Finally, Stadtfeld recognizes in the bass dominance of the Chaconne a spiritual closeness to the C minor Passacaglia BWV 582, which should al