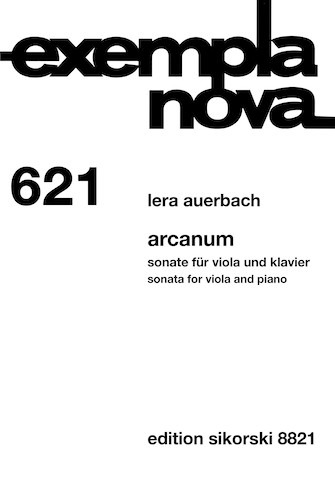 Lera Auerbach's work “Arcanum”, composed in 2013, was written for the violist Kim Kashkashian. The Soloist performed the world premiere together with the composer on 23 April 2013 in Vevey, during the course of a small tour. One day later the German premiere was given on 24 April in Ludwigshafen, followed by the Greece premiere on 26 April in Athens. “Arcanum” is a commissioned work by the society “Arts et Lettres”, based in Vevey. The composer had given Latin titles to the four movements of this composition: 1. Advenio, 2. Cinis, 3. Postremo and 4. Adempte.

Sonata No. 2 for Violin and Piano String

Triptych - This Mirror Has Three Faces: Trio No. 2 Ensemble

24 Preludes for Violin and Piano String

Arcanum has been added to your cart

Sonata No. 1 Schott Add to Cart

24 Preludes for Violin and Piano String Add to Cart