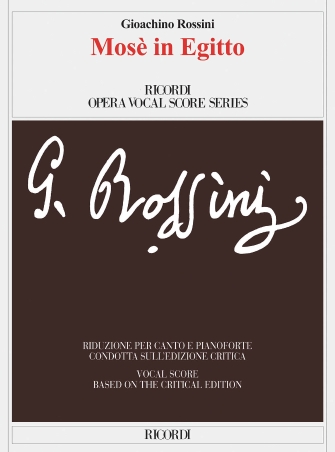 Mosè in Egitto (1818) is the fourth of the nine opere serie that Rossini composed for Naples between 1815 and 1822. As his letters to his mother show, Rossini was very proud of this opera, considering it an especially fine achievement that might appeal more to posterity than to the audiences of his day. In fact, it proved to be one of his most frequently performed opere serie. The present reduction for voice and piano, in two volumes, derives from the critical edition of the score, published by Fondazione Rossini Pesaro in collaboration with Casa Ricordi by Charles S. Brauner: the edition is based mainly on the autograph score now housed in the Bibliothèque nationale de France in Paris. This autograph score is complete but it is not completely autograph and many sections have offered some problems for the reconstruction of the text: the recitative in Act I and the Aria Mosè in Act II arenot by Rossini, the first five recitatives in Act II are not in Rossini's hand and may or may not be by Rossini, also not in Rossini's hand is the Aria Amaltea, although undoubtedly by Rossini because borrowed from his earlier opera Ciro in Babilonia. The Preface and the Critical Commentary offer for the first time some valid tools to reconstruct the entire history of the opera, since the first performance in Naples (1818, 1819) to the Parisian ones (1822 - 1840). In particular in the appendices are included the original Aria Faraone which, composed by Michele Carafa for the first two productions of the opera in Naples in 1818 and 1819, was later replaced by the Aria Faraone Rossini himself composed in 1820 and, in Appendix II, the new ending of the recitative following Duetto N. 3 which Rossini composed for one of the Parisian performances, after 1822.