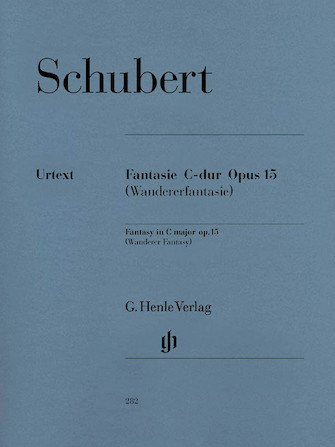 Schubert composed the Wandererfantasie in November 1822. Though generally designated as a year of crisis, an entire series of Schubert's important works were created precisely at this time, when the Wandererfantasie, for example, but also the Symphony in B minor, the “Unfinished,” began to cast their spells on music lovers all over the world. There were several precursors, in particular the fantasias of Carl Philipp Emanuel Bach and Mozart. Nevertheless, Schubert continued to develop the genre in this masterpiece. He combined the principle of the fantasia with that of the sonata cycle, by dividing the whole into four large sections (movements) that flow seamlessly into one another, whereby he derived the thematic material from a core which – not surprisingly – consisted of measures borrowed from the song Der Wanderer in the second movement. This work was one of the few instrumental works of Schubert's to have appeared in print during his lifetime, and was already receiving encomiums from the critics back in its day. It still ranks today among the most often played yet technically and musically highly challenging works of this composer.