Original Keys for High and Medium Voice and Piano 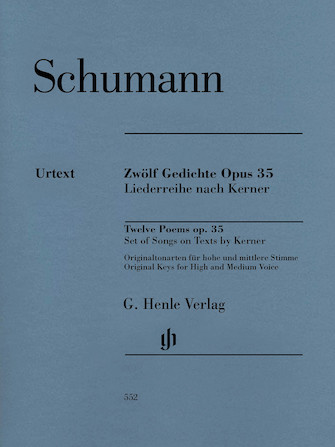 Original Keys for High and Medium Voice and Piano

As with the Dichterliebe (51480549), Frauenliebe und Leben (51480547) or the song cycles with texts by Heine and Eichendorff (51480548 and 51480550), the Kerner Cycle Op. 35 was written in 1840, Schumann's “Liederjahr”. Yet it has a special place: it was composed in the time immediately following Schumann's marriage to Clara Wieck. Schumann set a series of poems to music in November, during a “quiet week, which went by with composing and much loving and kissing”, and the cycle was complete by the turn of the year. It contains a great deal of intimate musical innuendos. The first edition of 1841 was soon followed by a second issue, many of the songs were published individually and the “Wanderlied” soon became a core piece in the repertoire. With Henle's edition the songs in Schumann's cycle are once again being published together in a single volume.

12 Poems Op. 35, Set of Songs on Texts by Kerner has been added to your cart

Duets for Soprano, Alto and Continuo Vocal Add to Cart

Due to high demand, 12 Poems Op. 35, Set of Songs on Texts by Kerner is on back order