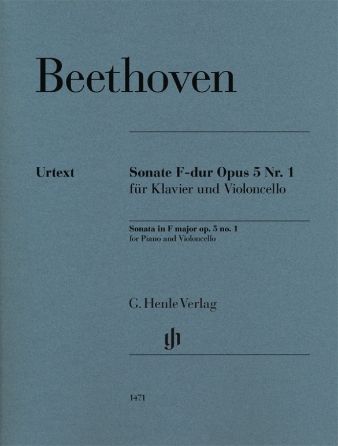 The two Sonatas op. 5 were written in 1796 expressly for the young Beethoven's performance with the cello virtuoso Jean Louis Duport at the Berlin court. That he wasn't eclipsed by the latter was ensured by the extremely scintillating piano part, with which Beethoven the pianist was able to present himself in the best light. Opening with a slow introduction, the Allegro of the F-major sonata dazzles with its abundance of melodies. The following Rondo weds musical wit with playfulness, guaranteeing the sonata's special popularity to this day. The Urtext edition by Jens Dufner is based on his research for the Critical Report of the Beethoven Complete Edition and thus features a musical text at the highest scholarly level. In the preface and Critical Report, he outlines the genesis and source situation of the sonata. Ian Fountain and David Geringas provide the fingerings.