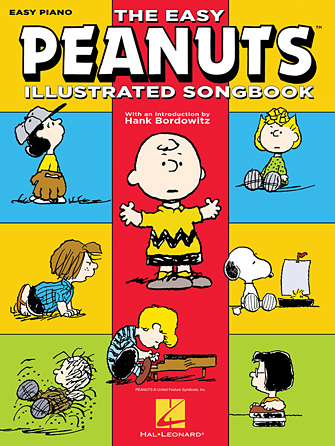 Lovingly rendered by the late Charles Schulz, Peanuts is much more than a simple comic strip. Charlie Brown, Linus, Lucy and of course, Snoopy, have sneaked into our psyche and become international symbols of purity and happiness. Schulz created the characters, but it was the music of Vince Guaraldi that gave them life.

Pre-Peanuts, Bay Area pianist and composer Guaraldi was best known for penning the standard “Cast Your Fate to the Wind,” but his own fate would soon change; when producer Lee Mendelson solicited him to score a documentary on Schulz, and subsequent television specials, Guaraldi's music became inextricably linked with Peanuts. Through the swinging beats of “Linus & Lucy” on the soundtrack to A Boy Named Charlie Brown, and the festive refrains on the holiday classic A Charlie Brown Christmas, he and his trio introduced millions of people to jazz in the mid-'60s – and far beyond.

Now, for the first time available with easy piano arrangements, this coffee-table quality songbook is a celebration of the art of Charles Schulz and the music of Vince Guaraldi. Within its stunning full-color, high-gloss pages are: an introduction by veteran music journalist Hank Bordowitz, which provides background on how the Schulz/Mendelson/Guaraldi collaboration came to be, and reflections from fellow musicians influenced by Guaraldi's music; and piano solo arrangements of 30 terrific tunes, each featuring a Peanuts illustration by Schulz. The songs include: Baseball Theme • Blue Charlie Brown • The Christmas Song • Christmas Time Is Here • Frieda (With the Naturally Curly Hair) • Great Pumpkin Waltz • Happiness Theme • He's Your Dog, Charlie Brown • Linus and Lucy • Oh, Good Grief • The Pebble Beach Theme • Peppermint Patty • Red Baron • Schroeder • Skating • You're in Love, Charlie Brown • and more.

This book will be an absolute treasure for any Peanuts or jazz fan!