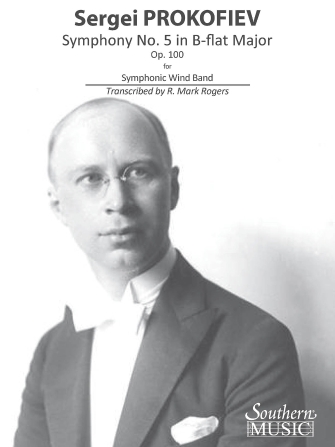 Written in a single summer month while World War II was still raging in 1944, Prokofiev's Symphony No. 5 would become not only one of the composer's most celebrated and performed works, it would stand among the giants in all of 20th Century classical compositions. Cast in four movements, Prokofiev once gave a statement that he intended it as a “hymn to free and happy Man, to his mighty powers, his pure and noble spirit.” He added, “I cannot say that I deliberately chose this theme. It was born in me and clamoured for expression. The music matured within me. It filled my soul.” Deliberate or not, his statement likely helped placate the Communist Soviet Party, who under Stalin ruthlessly, and often fatally, censored the art and music of the time. This Southern Music publication represents the first complete band transcription of Prokofiev's monumental work by one of the world's most respected wind band editors, Dr. R. Mark Rogers. The edition provides a rare opportunity in the symphonic wind band repertoire for ensembles to perform an orchestral masterpiece in its entirety.

Dance of the Knights from Romeo and Juliet