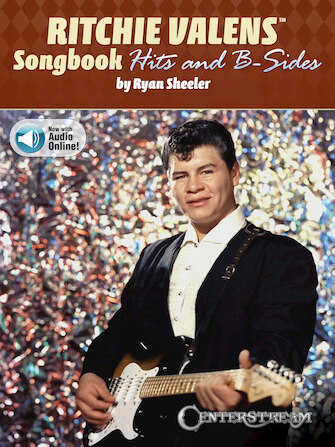 Ritchie Valens was the first nationally recognized Latino rock'n' roll star. He had a meteoric rise to fame in a career that lasted barely eight months, before his tragic death along with Buddy Holly, the Big Bopper and pilot Roger Peterson, in a plane crash north of Clear Lake, Iowa. Ritchie's unique guitar style and high-energy performances and his hits “Come On, Let's Go,” “Donna,” and “La Bamba” made him a well-known figure in the golden age of rock 'n' roll.

Valens had only two studio albums, Ritchie Valens and Ritchie, both released posthumously in 1959. In Ritchie Valens Songbook: Hits and B Sides, guitarist and author Ryan Sheeler presents an in-depth look at Ritchie's music from these two albums, featuring 12 note-for-note transcriptions with accompanying guitar tablature.

This is a follow up to Sheeler's book, Ritchie Valens: His Guitar and Music, featuring a complete exploration of “La Bamba,” plus Ritchie's guitars and history.

Due to high demand, Ritchie Valens Songbook – Hits and B-Sides is on back order