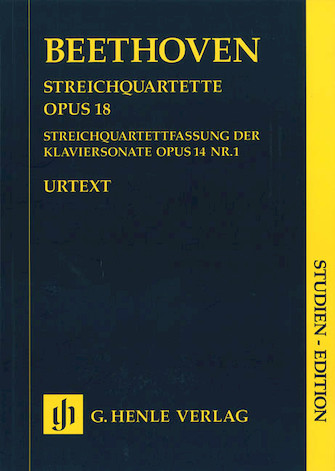 When it came to the genre of the string quartet, Beethoven was a relative latecomer. He was already 28 years old when he obtained the contract for the composition of the Quartets opp. 18 from Prince Lobkowitz, and 30 when he completed them. These are mature works that clearly distinguish themselves in their technical demands from, say, those of Mozart's quartets; yet on the other hand, they orient themselves musically on Mozartian practice. The A Major Quartet K. 464 obviously served as a model for Op. 18 no. 5. Be that as it may, Beethoven's six Quartets op. 18 are completely autonomous works that are on par with many of the major contributions to this genre.

In the 1980s, scribal copies – in which Beethoven had presented the quartets to his patron Prince Lobkowitz – once again became accessible. They represent a stage prior to the final version, having richer dynamics and articulation marks that make them interesting from a performance practice point of view. As the autographs of the Six Quartets op. 18 are no longer extant, these manuscripts assume a singular importance. This Henle Urtext edition is the first to take these manuscripts into consideration.